Why Race into Space? 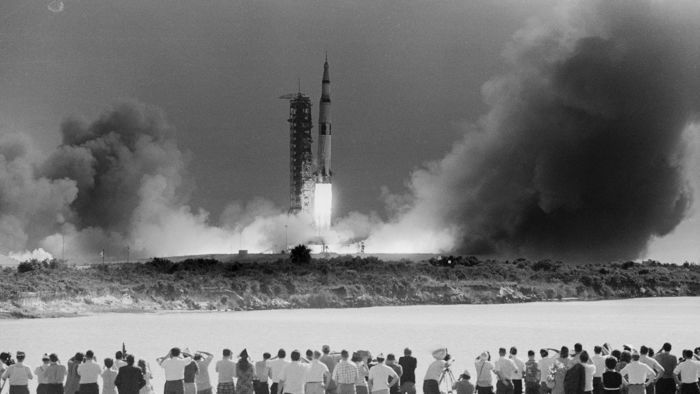 In the twentieth century space exploration reached its zenith during the Cold War. At this point, space exploration was revealed to be about two things above all. First, space was made the arena for a new sort of competition between nations. While America and Soviet Russia were engaged in a cold war, space exploration became the scale by which to measure the effectiveness of the two countries and, in fact, by which to measure the effectiveness of their respective paradigms of governance. America set out to prove that a free society will ultimately outperform a centrally-planned communist regime. This was not obvious.

Additionally, space was rightly perceived as a realm with great power for war and peace. The conquest of space as satellites were pushed into orbit around the planet was the source of great anxiety. Those countries that could do this first would gain the higher ground, certainly for the sake of reconnaissance and potentially for the sake of combat. Furthermore, rockets were synonymous with long range missiles. So space exploration, more than a merely arbitrary measure of national effectiveness, was directly linked to military supremacy.

Space exploration, by the account of Dr. Vannevar Bush, a prominent scientist and bureaucrat in America during the twentieth century, had three aspects: “military, propaganda, and scientific.”1 I suggest it was never about science and that these first two aspects were the necessary and sufficient conditions for space exploration in the twentieth century. I further argue that it was only nominally a program in space exploration. The ultimate goal of Cold War-era space programs was never to open the world up to the endless frontier of space. Rather, the programs were about dominance on this planet, and ultimately sought to bring the whole globe under technologies of surveillance, communications, and control.

In 1955, the National Security Council submitted a “Draft Statement of Policy on U.S. Scientific Satellite Program.”2 The statement outlined the political benefits of launching a satellite—useful for prestige and militaristic aims—under the auspices of scientific aims.

The policy statement demonstrates the many contributions that a satellite program could provide to the advancement of science; however, each scientific gain is immediately followed by a militaristic or propagandist advance. For example, insights into orbital decay patterns and air drag at extreme altitudes—ostensibly scientific pursuits—would find immediate application in defense communications and missiles. Similarly, basic information about the upper atmosphere would support development of aircraft and missiles; finding and tracking satellites would provide insight into challenges such as anti-missile missiles; and improved understanding of the ionosphere and the rate of earth rotation would support military communications programs.

Furthermore, early deployment of satellites would grant America prestige and psychological benefits, bolstered by the “unmistakable relationship to inter-continental ballistic missile technology.” Importantly, however, satellites would not themselves be a military threat to other nations. Rather, they would merely be representative of a militaristic prowess.

Nelson Rockefeller, Special Assistant to the President for Foreign Affairs, included a note on his enthusiasm for the proposed program. “The stake of prestige that is involved,” Rockefeller says, “makes this a race that we cannot afford to lose.” The narrative attached to the achievement, however, was as important as the achievement itself. Engaged in a war of ideologies, it was not sufficient for America to simply demonstrate technological and militaristic supremacy. Such achievements must also be framed in such a way as to be robust against enemy criticism.

Toward this end, Rockefeller suggests that the U.S. seek direct U.N. sponsorship of the program and appeal to The International Geophysical Year’s (IGY) endorsement of satellite launch as a “desirable scientific step.” Since Russia had representation in the IGY program, this could preempt and prevent any communist effort to portray the satellite project as evil or threatening. Science would provide the necessary cover for a satellite program ultimately useful for reconnaissance and global control.

The National Security Council put forward a promising program for initial launch of satellites under scientific auspices. However, the scientific value of the program was in fact simply a strategic way of framing a program driven by alternate motives. Science was by no means the true motivation for the program. In fact, to some, the whole effort of space exploration actively detracted from scientific progress.

Dr. Vannevar Bush suggests in the earlier-quoted essay that we “take a cold look at the whole program on space exploration.” Bush questions the program because of the “many unsolved problems, vital but unspectacular ones, which we are simultaneously neglecting” and because of “the possible progress in critical fields of research which could be made if a fraction of this enormous effort being made on “space” were devoted to their pursuit.” After World War II ended America had new interest in the continuation of peacetime programs in scientific research. However, the space race took up the mantle of war in organizing the nation around a project that would advance national prestige and militaristic supremacy—at the expense of more basic scientific progress.

Not only did the program of space exploration reroute scientific momentum toward an achievement with other aims, but it was in fact only superficially a program of exploration. During the Cold War, American space exploration pursued prestige, technological power, and geopolitical control—not the endless frontier of space.

The early success of Soviet space programs during the Cold War suggested that socialism may in fact be a more effective means of organization than capitalism.3 Furthermore, “Communist propaganda relentlessly criticized America and the West for militarism and imperialism” and so NASA, a space agency established under the banner of scientific exploration, “would project a positive American image to allies in Western Europe and elsewhere.” By the mid-1960s the Soviet space program began to fall apart and in 1969, when American astronauts Neil Armstrong and Buzz Aldrin walked on the Moon with Michael Collins in orbit above, their achievement was the culmination of the space race challenge. In the years that followed, NASA sought federal approval for additional space exploration, but the administration and the nation had lost interest. The space race was over and by the mid-1970s, NASA funding was effectively half what it had been a decade earlier.

American space exploration took man to the moon and back. However, once this achievement had secured America’s reputation for effectiveness in science and technology, the program lost its momentum. Space exploration, after all, seemed to be only a step toward a greater goal. The space program proved consequential not for its scientific insights, but for its contribution to national prestige and global power. “After all was said and done,” historian Paul Edwards explains, “the space program’s chief products were not outward- but inward-looking: spy cameras to pierce the Soviet Union’s veil, pictures of the Earth drifting alone through space, pictures of the closed world.”4 Space exploration was ultimately about supremacy here on Earth, not free roam out among the stars.

Although space programs were initiated under the auspices of scientific investigation, this was merely a strategic way of framing the programs. During the Cold War, space exploration was a competition to establish national supremacy, and ultimately America was able to prove its superiority over the socialist regime of Soviet Russia. Furthermore, the space program in fact detracted from scientific progress insofar as it directed research attention to a spectacle. By the final analysis, space exploration was about neither exploration nor science—it was about prestige, power, and control here on Earth.

Warhol said, “In the future, everyone will be world-famous for 15 minutes.” He was onto something. The nature of fame has changed a lot since then, because the nature of the media has changed. Warhol was working in an age of mass media—... Continue →